A growing number of people persist in asserting that Google is dying. Believe what they say, Google’s search results are said to be increasingly riddled with paid advertisements, and successful spam websites are increasingly getting higher in search results by outwitting the company’s algorithms. The end result would be Google Search slowly deteriorating, becoming less useful and more boring.

Google’s search results would be less and less reliable

In the early 2000s, Google quickly caught on with people because of how easily it could index any website anywhere in the world. This online search tool provided access to everything a person could want from the Internet. For some, the words “Internet” and “Google” were confused, while for others they were one and the same. At that time, the company was very successful and grew rapidly within a few years. Even today, for ordinary mortals, the Internet revolves around a simple word: “Google”. 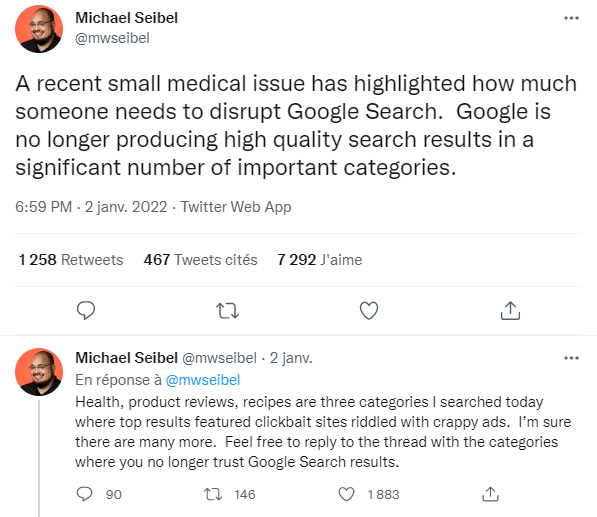 However, some insiders believe that Google is not really what it used to be, its advertising management greatly influencing search results to the great barrage of Internet users. Google’s results would be increasingly “refined” to answer 80% of the most popular requests, while becoming much worse for technical or complex requests. Once you get past the first or second page, the results are even worse, with pages completely unrelated to the query (for example, they don’t even contain the search phrases), said one of the reviewers of the search engine.

They’re probably testing or have already implemented some sort of multi-armed bandit type optimization, like for YouTube’s search results, or they’re just showing all popular pages (disregarding relevance ) to see if they result in a click, he added. Others believe that in 2000 Google became popular because hackers realized it was better than Lycos (a search engine launched in 1994) or Excite (a collection of Web sites and services, launched in 1995). But due to these problems, users would use Google less and less.

A recent minor medical issue has highlighted just how badly someone has to mess with Google Search. Google no longer produces high-quality search results in a significant number of important categories. Health, product reviews and recipes are three categories I searched today and where the first results showed “clickbait” type sites (“putaclic” or “freelance clicks”) riddled with advertisements rotten. I’m sure there are many more, a January Twitter review from Michael Seibel, Partner at Y Combinator and Managing Director of YC Early Stage.

Advertising and SEO would be Google’s main problems

According to critics, Google’s algorithms are dying due to advertising, spam, SEO (search engine optimization) and AI. Dmitri Kyle Brereton, software engineer and writer, says “it’s obvious that ad serving creates misaligned incentives for search engines. Google’s founders themselves would have pointed this out early in their business. “. In 1998, Sergey Brin and Larry Page reportedly said: Currently, the predominant business model for commercial search engines is advertising. 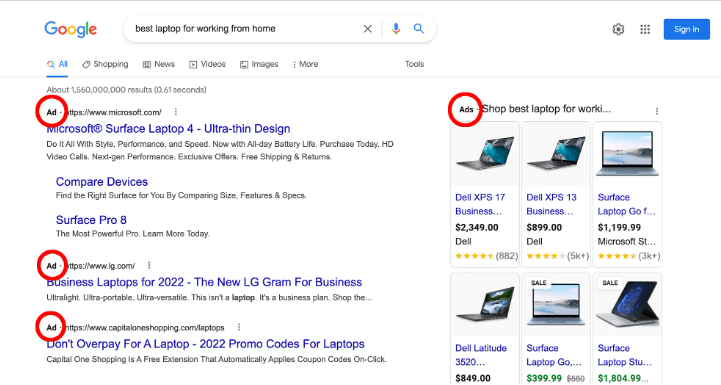 The goals of the advertising business model do not always align with providing quality search to users. We expect financial search engines through advertising to be inherently biased in favor of advertisers and away from consumer needs. Additionally, advertising revenue often provides an incentive to provide poor quality search results. According to critics, these reflections on the failings of financial search engines through advertising read like an instruction manual for what Google did next.

Page and Brin began selling ads alongside their search results in the early 2000s, and Google’s advertising business has grown steadily ever since. Ads served on Google’s network – which includes YouTube and ad placements on third-party sites – would net the company a staggering $54 billion in the first quarter of 2022. It could bring in as much as $180 billion. dollars in the year 2022. They have recently pushed the envelope to the limit in order to extract every penny before their inevitable collapse, Brereton said.

Reviews of the quality and relevance of search results have increased dramatically in recent months. However, a Google spokesperson argued this year that “the quality of Google Search has improved significantly over time.” Every year, we make thousands of Google improvements, and our testing gives us clear evidence that these changes are truly becoming the best search for people. Over the past seven years, we’ve reduced irrelevant results by more than 50%, the spokesperson said. 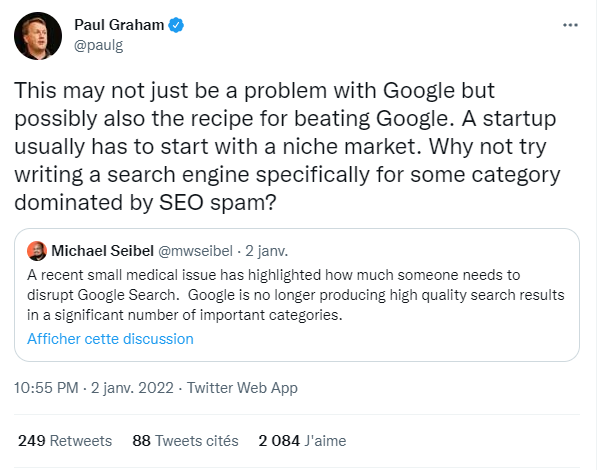 As for SEO, critics including Brereton claim that there are thousands of people whose only job is to mess with algorithms to get to the top of a Google results page. It should therefore come as no surprise that the quality of search results has deteriorated. To be honest, this problem would probably arise with any search engine, but one would expect Google to be able to come up with an algorithm that is less manipulable,” Brereton wrote in a blog post last February. .

Finally, as Google tries to make its search engine “smarter” with artificial intelligence, critics accuse AI of skewing search results. Increasingly, Google isn’t giving you results that match what you typed. It tries to be smart and understand what you “really meant”, plus personalize things for you. If you really meant to say exactly what you typed, then it’s game over. Even the exact match (” “) search operator no longer gives an exact match, which is quite bizarre, Brereton said.

suggesting potential Google alternatives, Brereton claims that Bing and DuckDuckGo will prevent many similar problems to Google, such as algorithm-related spam and ads. According to him, the most interesting new alternatives are the sites Neeva, Brave and You.com. Brave recently ditched Google’s search engine in favor of its own search engine.

However, critics felt that Google’s stranglehold on the search market makes it difficult for a competitor to emerge. The alternative can’t just be twice as good, it has to be so much better that it’s worth switching sites, suggests Brereton.

What is your opinion on the subject?

Do you think Google search is deteriorating?

What do you think of Google’s problems raised by Internet users?

Have you identified any other problems that Google’s search engine does not suffer from?

Can Google find an advantageous compromise between search and advertising?

Do you think Google’s use of AI improves search results?

Which search engine could be the next Google? Here’s how some are trying to clinch the Mountain View gauntlet